In 2019, The Flemish Govermental Master Buildership exists for twenty years. To celebrate this anniversary, the Flemish Government Architect organizes a travelling exhibition about its most known working method for public commissions: the Open Call.

After presentations in Ghent, Brussels, Hasselt and Kortrijk, the Flemish Architecture Institute is bringing the exhibition to de Singel in a reworked and extended edition.

Flanders has a Government Architect (Vlaams Bouwmeester) since 1999. He or she is appointed by the Flemish government as an expert for five years, with the task of promoting the quality of the built environment. Together with a team of architects, the Bouwmeester focuses, among other things, on assisting public authorities in tackling spatial tasks. One of the methods developed for this purpose is the Open Call: a design competition with an international scope.

In the 1990s, there were hardly any government buildings in our country that architecture critics or the wider public were enthusiastic about. Partly as a result of the Open Call, from the turn of the millennium there was a positive change in public building culture in Flanders.

Twice a year, when the Flemish Government Architect launches the Open Call, many architect and designer’s hearts makes a leap. This call enables public clients to appoint a design team for their projects in a transparent manner and with international reach. Thanks to this selection procedure, Flanders was able to add a few architectural gems: the Dossin Barracks in Mechelen, the Provinciehuis in Antwerp, or the extension of the Old Prison into a new city campus for the University of Hasselt.

In addition to archive material and testimonies, this exhibition also features new installations. It shows exactly how the procedure works, and which projects saw the light of day over the past 20 years. The travelling exhibition has already stopped in Ghent and Brussels. After Hasselt, the exhibition travelled to Kortrijk and Leuven, ending in the autumn of 2021 at the Flemish Architecture Institute in Antwerp.

The final presentation in deSingel has been supplemented with new audiovisual material. Visitors gain insight into the methodology used by the Flemish Government Architect to support public clients in their quality efforts.

Did architectural criticism in the 1990s help to pave the way for the Government Architect position and the Open Call? Does the key to quality lie in smart procedures? What is a ‘strong’ public commissioner in a democratic system?

These and other questions form the basis of a series of essays in which eight authors look back on two decades of public commissions and offer current reflections on these issues.

The publication 'More Than a Competition. The Open Call in a Changing Building Culture.', discusses from different perspectives why this influential ‘competition’ is not quite an architecture competition while at the same time being much more. 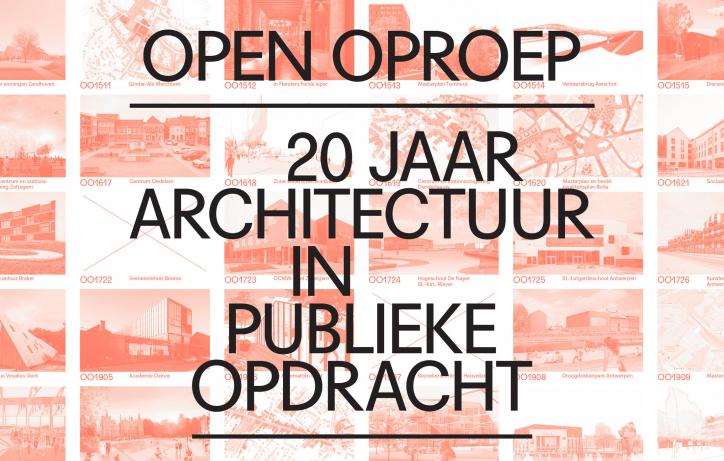 With the support of the Flemish Community

To make your visit as safe as possible, you must respect the following measures:

More Than a Competition. The Open Call in a Changing Building Culture
Open call 42 online

Help us improve the site!

We are working on a new version of the site. You can help us by answering 2 short questions.

Prefer to answer later? No problem, close this window and complete the questions later.

Thank you for your cooperation!

During 2023 we are working on a new site. Would you like to be kept informed about interim results? Leave your email address here and we'll send you occasional updates.